Bushfires and grass fires are a serious threat to a farmer's livelihood. Years of hard work can be wiped out in a moment.

While it is impossible to eliminate the risk of fire, there are things you can do to reduce the threat. A bushfire action plan should be an integral part of your overall business management. The plan should include regular fuel reduction and an adherence to good farm practices.

Further information on farm protection can be found on other fact sheets available from your local council or regional CFS office.

Burning off is the main farming practice that produces the greatest risk every summer. You need to plan carefully and carry out the procedure with extreme caution at the right time, under the right conditions. This will reduce the danger of a burn off getting out of control.

During the Fire Danger Season

You cannot burn-off on a Total Fire Ban day

Outside the Fire Danger Season

When planning a burn off you should follow these safety procedures:

Some councils have totally prohibited the use of open fires and incinerators for waste disposal on domestic premises. Check with your local council regarding regulations and restrictions for burning rubbish.

Burning green fuel generates lots of smoke and should be avoided. Alternative methods such as mulching or dumping should be considered.

A permit is required to burn rubbish or garden refuse on the ground during the Fire Danger Season. The area must be cleared for 4 metres. You must have a person in attendance at all times with enough water available to extinguish the fire.

The new Australian Fire Danger Rating System (AFDRS) is redesigning the forecasting of fire danger in Australia. It is progressing beyond science that is more than 60 years old, and uses the latest science and technology to better reflect our environmental and weather conditions.

Following the national transition to the new AFDRS on 1 September 2022, we continue to support stakeholders in understanding and adapting to the new system.

Haystacks can catch fire from: 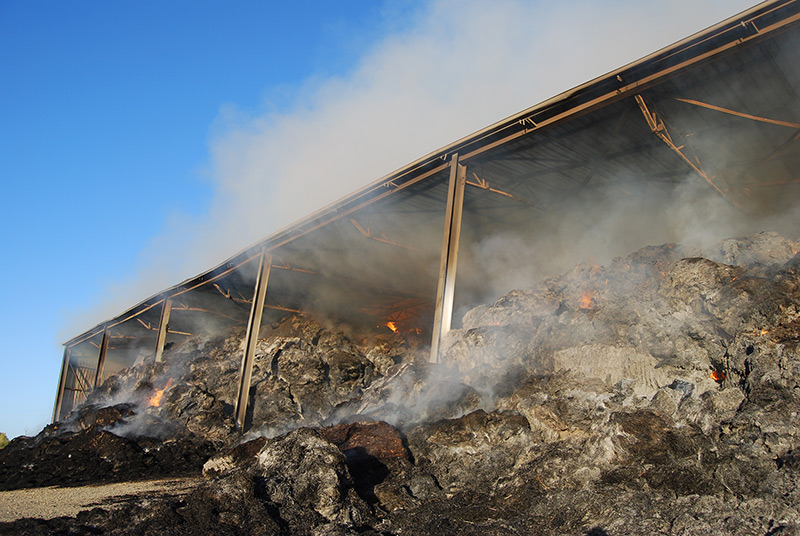 Hay can also self-ignite when excessive heat builds up. This is called spontaneous combustion, or spontaneous ignition, and is a common cause of haystack fires.

Haystack fires can happen in any type of bale stored in a haystack. Even hay stored as single bales can spontaneously ignite under some conditions. Haystack fires can spread quickly into the surrounding area and often result in thousands of dollars of damage.

Why does hay heat?

If hay is too "green" (the internal plant moisture content is too high) or it gets damp before, during or after baling, a complex series of biological and chemical processes may cause the hay to heat.

This is because the plant material is still alive and using energy (respiration). This allows microorganisms, such as bacteria and fungi, to grow in the moist environment. These processes generate heat, which may result in the loss of dry matter, nutritive value, and reduced palatability and, if left unchecked, could result in ignition.

Once temperatures reach about 70°C, they may increase extremely rapidly to the point of spontaneous ignition (about 170°C). Spontaneous ignition may occur within two weeks of baling and may continue to pose a threat for well over three months.

Use a temperature probe or a crow-bar to regularly monitor all haystacks for signs that the hay is heating. Other signs of heating include:

Minimising the risk of haystack fire

It is important to remember that just one damp bale is enough to ignite a haystack, so make sure you protect all bales from rain, runoff, leaking roofs and gutters. If some bales become damp, they should be stored separately and closely monitored.

Make sure haystacks are limited in size and have enough airflow to allow heat and moisture to escape.

If you get hay from another area, make sure you know the history and moisture content of the hay before you store it.

Be careful when using vehicles, machinery and equipment near haystacks, especially during days of high fire danger.

Store hay in different locations around your farm and limit the size of the stacks. This will reduce the risk of losing all of your hay if a fire does occur.

Store hay well away from:

Create and maintain fuel breaks around haystacks. The wider the break, the more useful it will be to stop a haystack fire from escaping into the surrounding area or to stop a fire from reaching your stored hay.

What to do if hay is heating

If there are signs that the hay is starting to heat, pull the stack apart to improve airflow and allow the bales to cool.

Be aware that very hot hay may suddenly catch alight if it is pulled apart, so if any part of the stack is near or above 70°C or you see or smell smoke, you should call 000 immediately and ask for assistance from the CFS.

Don't walk across hay that may be heating. Charred bales inside the stack may suddenly collapse and result in entrapment, and the rush of air may result in a sudden flare-up.

The two most common LP Gases are Propane and Butane. LP Gas is widely used as a domestic fuel because it is convenient, relatively inexpensive and safe. As with any fuel, however, certain simple safety precautions must be observed in its use.

LP Gas is usually stored as a liquid under pressure. When released into the atmosphere at any temperature above its boiling point (-42ºC for propane and 0ºC for butane) it will change from liquid to vapour. Liquid LPG on bare skin causes frostbite.

LP Gas is heavier than air. In both its liquid and vapour states, it is colourless and odourless. It is considered to be non-toxic, but may have some anaesthetic effect if inhaled in high concentrations.

If a leak or a fire occurs when using LP Gas equipment, call 000 to request assistance from the CFS.

Danger to crops from engine/vehicle exhausts

Vehicle and engine exhausts cause about 25 fires each year in rural South Australia.

The two main causes are from sparks emitted by the exhaust system and from hot exhaust parts or radiated heat igniting flammable material.

Sparks tend to be caused by engine backfiring or from hot material, such as carbon being expelled from the exhaust.

Flammable vegetation can catch alight when it is caught in a vehicle´s hot metal exhaust pipe, muffler or catalytic converter and shield when driving through dry grass or crop paddocks. Under normal running conditions any motor vehicle exhaust can become hot enough to start a fire in dry grass. The amount of heat radiated from a hot exhaust may also be sufficient to ignite flammable vegetation if it is located too close.

We ask that you follow these safety steps during the Fire Danger Season:

Rotary mowers or slashers used in stubble retention practices can start bushfires through a combination of sparks from the blades striking stones and contact with the vegetation being cut.

We advise that mowers, especially rotary types should not be used in dry grass, stubble or crops on days when there is the chance of fires starting and spreading.

Contact your local council Fire Prevention Officer to get a copy of the local Code of Practice for Mowing and Slashing in your council area. Should a fire start and escape during slashing, the operator may be liable to a fine of up to $5,000 and face possible litigation from any affected neighbour.

When using a mower or slasher, chain saw, brush cutter or edger during the Fire Danger Season you must comply with the Fire and Emergency Services Act 2005 by either:

Any tractor powered by an internal combustion engine must also have an exhaust system where:

Engine exhaust emitted by a turbo charged engine, as a waste gate will be taken to leave through the exhaust system of the engine or vehicle.

Sparks from angle grinders, welders, oxy cutting tools and other gas fired appliances used during the Fire Danger Season can also cause bushfires.

All operators need to observe the rules for using these appliances outdoors during the Fire Danger Season and comply with the Fire and Emergency Services Act 2005.

Farmers need to take precautions to ensure that every item of equipment on their farm, which generates heat in one form or another, is in good working order. That it is not likely to ignite crops or other flammable substances during farming operations.

You need to check that:

Save crops through equipment maintenance

All farm machinery needs to be regularly maintained and serviced during the summer months to protect crops and machinery.